When you have a spouse, parent or grandparent in hospital, one of the greatest concerns is for their comfort.

Are they in pain?

Are the medical staff doing their best?

We’re sure these are some of the questions that Linda Moss and her two sisters Sharon and Patty had when their 77-year-old father, Bob Wilson, wound up in hospital back in November 2018.

Since falling last winter and suffering a brain injury, Wilson has been recovering at Joseph Brant Hospital in Burlington, Ontario, Canada.

For half a year now, the daughters have taken turns keeping their father company, holding his hands, and giving him hope.

But what they found next was appalling

In November, 77 year old Bob Wilson was dancing at a wedding, playing golf and bowling. Now he is fighting for his life. Not because of the brain injury he suffered from a serious fall down the stairs. But because of what happened to him while in the hospital. pic.twitter.com/DOqbCeaSpi

In April, Wilson was transferred to Hamilton General hospital for cranial surgery. Healthcare experts alerted his daughters to a bedsore on their father’s buttocks that had eroded his flesh to the bone.

However, at the Burlington hospital, the sisters never suspected a thing — nor were they given any reason to.

“I was shocked. That’s black, rotting skin. When I saw that… oh my God,” said Sharon. “He was literally lying there rotting alive and we didn’t know… We had no idea that this demon was brewing behind him. We don’t want another family to go through what we are going through.” (1)

Even the physician and nurses at Hamilton General had never seen anything like Wilson’s bedsore, which the sisters learned, had entered into his bones and blood.

As a result, his body has become septic — a condition that occurs when a severe infection spreads to the blood. Typically this leads to lowered blood pressure and poor circulation, equating to improper blood flow to vital tissues and organs. (2)

Journalist Avery Haines tweeted a photo of Wilson and one of his daughters holding hands, with the caption:

“The infection from the pressure wound has spread to the blood and to the bones. The family has been told Bob will die from this. Sadly he is not alone. The numbers are staggering. More than 10,000 cases reported in Ontario hospitals in one year. More than 24,000 in [long-term care] homes.”

What has Joseph Brant Hospital responded? 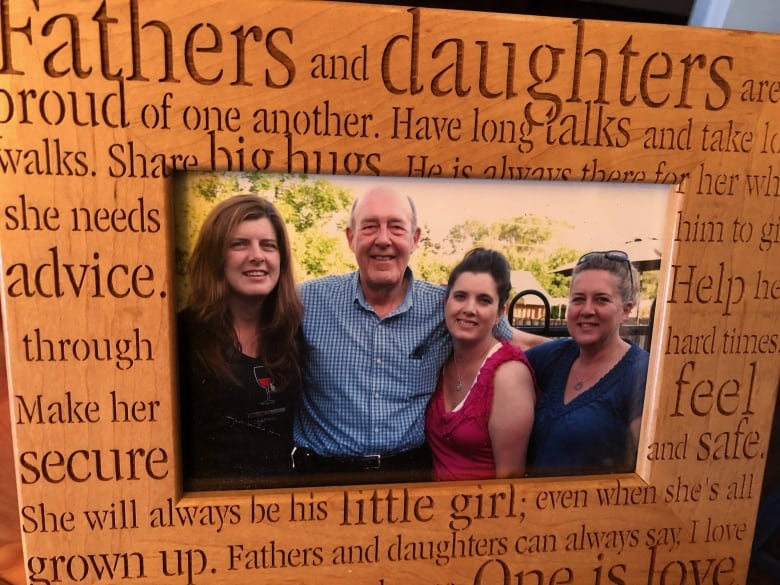 Source: Bob Wilson poses for a photo with his daughters before a fall that sent him to hospital. (Supplied by Linda Moss)

Due to privacy laws, a representative told CTV news they cannot discuss individual cases. However, they did say that “the hospital undertakes quality of care reviews, specifically looking for opportunities to reduce the risk of further similar incidents, and to improve our overall performance.” (1)

The president of Joseph Brant Hospital, Eric Vandewall, did say that he personally apologized to Wilson and his family for what happened. He added:

“We are currently conducting a comprehensive and thorough review of Mr. Wilson’s care while he was at Joseph Brant Hospital and we will hold further meetings with Mr. Wilson’s family to share and discuss the results of our review.” (3)

What are bed sores?

Also known as pressure ulcers, bedsores are injuries to both skin and underlying tissue caused by prolonged pressure on the skin. Oftentimes, bedsores occur on bony areas of the body (e.g., tailbone, buttocks, hips, ankles, heels, shoulder blades, spine, and the back or sides of the head).

According to Mayo Clinic, these are the warning signs to watch for: (4)

Bob’s family wanted the picture of his bedsore shown publicly as a wakeup call but it is just too distressing to post. Instead we have embedded it on a link in our web story https://t.co/STmm2yf98p. Also visit https://t.co/DesDd397an for help advocating for proper wound care. pic.twitter.com/UCmvdTZnX2

Although medical professionals claimed that Wilson’s bedsore was unstageable, bedsores usually fall into one of several stages depending on overall severity, depth, and other factors.

The Canadian Patient Safety Institute (CPSI) prepared a Hospital Harm Indicators report. In it, the CPSI “[encourages] patients to be turned and repositioned at least every two hours.” (5)

“It’s hard to believe this happened and he could lose his life, not because of major brain surgery, but because of a preventable bedsore,” said Linda. “That’s what is so heartbreaking.”

Wilson’s family is using this opportunity to share his story with other families to raise awareness for others who have loved ones in a similar situation.

For more information on how to prevent bedsores, check out the CPSI’s evidence-informed practices.

Advertisement
Dashboard
Read Next: New Study: Deadly Flesh-Eating Genital Infection Linked to Certain Diabetes Medication
We use cookies to ensure that we give you the best experience on our website. If you would like to avoid this, please disable cookies in your browser settings.Thanks for letting me know!