Old age can be lonely, and that loneliness can have severe repercussions to our mental health, including memory loss, dementia, and depression. Keith Davison is one such example – he had reached his limit in the months after the death of his wife Evy.

“You just can’t imagine what it’s like,” says Davison, who lost his wife to cancer in 2016 after a marriage of 66 years. “You cry a lot. That’s just the way it is, because she’s not here.”

But if you were to visit Keith today, you would probably be greeted by the sound of laughter and splashing water. Late in the spring of this year, Keith installed an in-ground swimming pool and soon found it filled with children from all across the neighborhood. 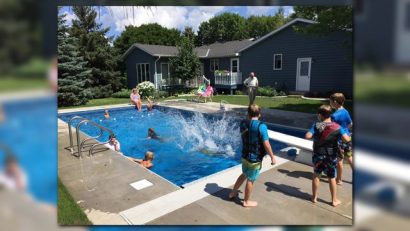 Not a lot of people believed Keith when he first told them about his idea. His neighbor Jessica Huebner was one of them.  “This spring when I saw him marking the yard, I told my husband, he’s really going to put a pool in his backyard.”

Since the pool opened in July, Jessica and her children have become regulars. This is no small pool either; the pool stretches 32 feet long and is 9 feet deep under the diving board. It’s a welcome addition to a neighborhood with no public pool available in the hot summer months.

Davison has three adult children, but no grandchildren.  Huebner says she now tells her neighbor, “’You kind of adopted our whole neighborhood of kids, these are your grandkids.’” 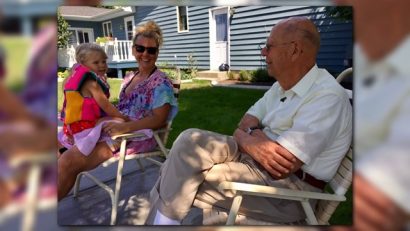 The kids aren’t the only ones enjoying the pool. Keith admits that he enjoys to go for a dip after all the children have gone home for the day.

But if you were to walk into the backyard, you would see Keith sitting in the shade, looking at the joy on the faces of the children. The pool rules require a parent or grandparent be with the children as they swim.

While it may seem strange, from an economic standpoint, for a 94-year old man to install a swimming pool, Keith doesn’t mind. “I’m not sitting by myself looking at the walls,” he smiles.

One of the greatest threats to our cognitive abilities as we age is isolation. As sad as it is, many of the elderly are often cast aside and forgotten, left alone in their old age. This lack of social interaction and mental stimulation is detrimental to their cognitive abilities. Social isolation, aging researchers have discovered, puts people at risk of losing some of the brain reserves they have built up over a lifetime [2].

There are many ways to be social that work very well and don’t require installing a giant pool in your backyard. Volunteering invites you into social situations with all kinds of different people who can create stimulating conversation and flex our brain muscles and fight back against age-related memory loss.

Dr. Anne Fabiny, chief of geriatrics at Cambridge Health Alliance and an assistant professor of medicine at Harvard Medical School, says it is important for those of us on the older side to keep ourselves mentally stimulated and pushing ourselves. “Be open to new experiences that cause you to see the world and do things differently,” she says [2].

Alongside meaningful social interactions, it is also important to stay physically active, get enough sleep, avoid smoking, limit alcohol to one drink a day, and eat a balanced diet [1].

If you’re worried about your mental health, longevity, and memory, here are 3 great strategies to stimulate your brain and keep it running like it did when you were in your 20s! [2]

Be A Lifelong Learner

The first half of our lives are spent building dense network connections between brain cells. Scientists call this “cognitive reserve.” Continuing to learn new things builds and maintains these connections, while strengthening old ones.

Imagine all mental activities as a spectrum. Watching a nature documentary would be on the passive end of the spectrum as it is only mildly challenging. Learning a new language would be on the active, challenging end. When it comes to preserving our cognitive resources, challenging tasks have the biggest impact.

One stereotype of aging is that older people are homebodies that ‘know what they like’, while younger generations are bold explorers. While this is just a stereotype, it can be easy to fall into this trap. Getting out of our comfort zone challenges our mental abilities by placing us in an unfamiliar landscape and forcing us to absorb new information and experiences, strengthening mental connections.

Old age can be lonely, but it doesn’t have to be. Keith Davison shows us that there is more to life than just passing the time. Our time here is meant to be shared and lived to the fullest, each and every day.

Company Designs Chair for People Who Love To Sit Cross-Legged

Advertisement
Dashboard
Read Next: Handheld Screen Time Linked to Delayed Speech Development
We use cookies to ensure that we give you the best experience on our website. If you would like to avoid this, please disable cookies in your browser settings.Thanks for letting me know!