No one quite understands what causes conjoined twins. The fact that they are so rare doesn’t give health experts much to work with either.

There are a couple of theories, according to Mayo Clinic, one of which suggests that during early development, two separate embryos somehow fuse together.

The second theory is that “when the embryo splits… usually between 13 and 15 days after conception… separation stops before the process is complete, and the resulting twins are conjoined.” (1)

However, when you are faced with a set of conjoined twins in real life, theories won’t necessarily help anyone.

And that’s exactly what five surgeons, ten doctors, and fifteen nurses had to face in early December of 2018.

At S S Hospital in Varanasi, India, twin sisters weighing seven pounds in total were born connected at the stomach. No one was sure whether they would survive.

According to University of Maryland Medical Center, conjoined twins occur just once in every 200,000 live births. (2)

The outlook did not look good for the conjoined twin sisters.

The 40-second video below shows you how the conjoined twin sisters looked before the surgery:

When they were only three-days-old, doctors emphasized that trying to separate their conjoined twins would give them the biggest chance at a longer life.

In a seemingly hopeless situation, the parents could not afford the medical costs. But the surgeons assured them that they would not have to pay a penny – the hospital would cover the costs.

Despite their uncertainty and fear of the unknown, they agreed and put their trust in the hospital staff’s hands on December 6, 2018.

The operation, lasting five hours, was fortunately a success. 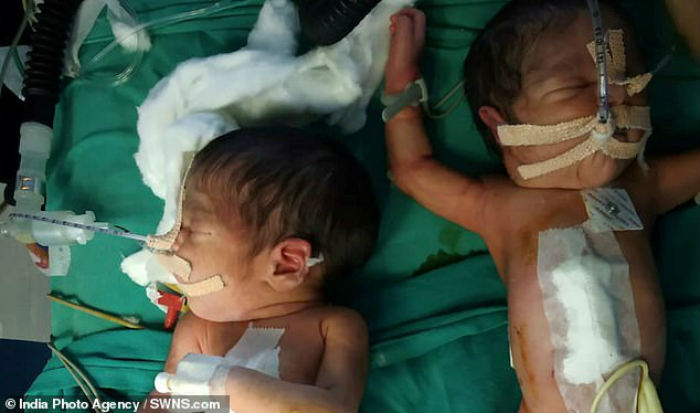 “It was one of the rarest operations our hospital does,” said Dr. Vaibhav Pandey, assistant professor of pediatric surgery at S S Hospital.

“I am very happy that both survived in spite of the long operation and the children being weak. It was a challenging task.” (4)

To make sure they captured this piece of history, the medical team took a quick celebratory photo. Since the operation, they have been recovering well and are expected to be home soon.

What an incredible story and testament to the love and care these surgeons, doctors, and nurses truly have towards the families that walk through their doors.

Fucking Is No More in Austria